From Magicpedia, the free online encyclopedia for magicians by magicians.
Jump to: navigation, search
Conjurors' Magazine was a Magic Periodical put out by Walter B. Gibson that ran from February 1945 until September 1949 (Vol 5, No.7).

Houdini's brother, Hardeen, helped get this magazine launched, but he passed away shortly after the magazine started.

First advertised as The New Conjurors' Magazine and dropped the word "New" after Vol 1, No. 1.

Julien Proskauer included a clause binding Gibson to print anything he wrote, whether Gibson agreed with the view. The only time he used this clause was to defend Chester Morris over an exposure controversy.

It eventually changed hands to Ed Dart in 1947 (Volume 4, #10), with Robert Lund as editor (Gibson still continued as a columnist).

It was also selected as the official organ for the Magician's Guild of America.

A complete file consists of 55 issues.

From Vol. 4. No. 12 thru Vol. 5, No.7, the covers had drawings by Ed Mishell of magicians Alexander Herrmann, T. Nelson Downs, Henry Ridgely Evans, Imro Fox, The Martinka's, Robert-Houdin and Chung Ling Soo. 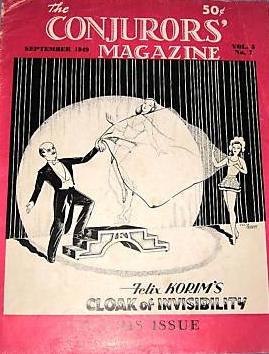 See also: Conjurers' Monthly Magazine by Harry Houdini that only ran from September 1906 until August 1907 .