Linga Singh (1884-1937) performed all over the world for years with his colorful magic and illusion show.

Born Amar Nath Dutt in Lahore (then in India) in 1884. His own version of his story was that he went to Edinburgh school of medicine and then jumped ship[1], but in fact in 1901 he was conned by the self-styled “Prince Ranjit of Baluchistan”[2], along with more than twenty other young Indians, into leaving India (to which he never returned) and going to the USA. After various adventures in the USA, England and France, including working as a cabin boy, touring with Ruth St. Denis's dance company, a flirtation with the Indian Revolutionary Party who sent him back to the USA to learn about guns and bombs, and imprisonment in Paris for blackmail, he ended up performing in Buenos Aires in 1909. Here he met and married his French wife, Charlotte, and they returned to England in 1910, expecting their first child. Later that year he launched his career in the UK as “Ram Bhuj the Necromancer of the Himalayas” and then re-launched himself as “Linga Singh” at the end of 1911 and that was the stage name that he used as a professional magician until the end of his life in 1937. 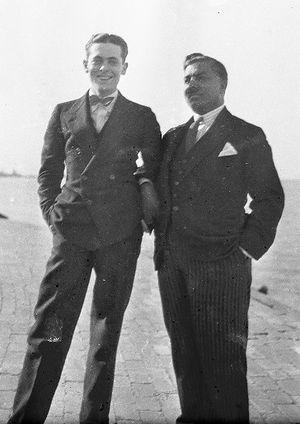 He was known for his colorful costumes and flamboyant Eastern show and remained very active for just over 25 years, based in London but performing all over Europe.

Towards the end of November 1937, Linga Singh was appearing at the Theatre Royal in West Bromwich, England. He was taken ill, but refusing to disappoint the public, he struggled to carry on. Eventually he collapsed and was taken to hospital where he only lived a few days and died from pneumonia at the age of 53. According to his wife Charlotte, who was from France, his last words were "Destroy my costumes and burn all my tricks, for they are mine and must not survive me". Being overcome by the sudden passing of her husband, she asked Miss Lakhsmi (Miss Maud Freeman), to see that his last wishes were carried out. He was cremated at Golders Green with Hindu rites on December 1st.[3] On the 2nd of December his props and costumes, valued at £5,000, were covered with petrol and burned.

The Hindu Sorcerer had one surviving son after his other two sons died in infancy, who never followed the theatrical profession, but became a dentist.[4]