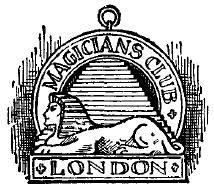 It was a concept of Will Goldston who had taken umbrage with The Magic Circle (founded in 1905) and decided to start his own society. He wrote an article titled "The League of Magicians - A Suggestion by Will Goldston" in his Magician Annual for 1910-11. [1]

The first meeting was officially reported in Goldston's Magician Monthly.

Houdini was elected president, the rest as Vice-Presidents with Stanley Collins as Secretary and Will Goldston as Treasurer. Nearly a hundred members were enrolled at the inaugural meeting on May 27, 1911. Houdini remained president until his death.

After the death of Houdini in 1926, Will Goldston was unanimously elected to succeed him. He held this office for the next three years, relinquishing it to Louis Gautier in 1929, but continuing to serve as Treasurer

The club seemed to have disbanded some time after Will Goldston passed away in 1948. In Goodliffe's Abracadabra magazine July 1949, inquiries were made regarding the Magicians' Club, London, since the death of Will Goldston asking if it had died a natural death along with its founder. As far as they were able to ascertain, it had.