From Magicpedia, the free online encyclopedia for magicians by magicians.
Jump to: navigation, search
Spellbound was a live magic show starring Doug Henning that ran for two weeks at Royal Alexandra Theatre in Toronto late 1973. 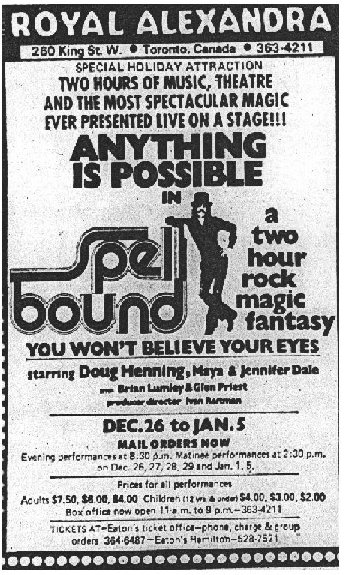 A newspaper ad for Spellbound.

Impressed with the success of the rock musical Hair, Doug convinced college friend Ivan Reitman (Who would go on to great success as a movie producer & director) to co-produce a "rock concert of illusion" to be called Spellbound. Doug happened across a college friend who had just taken a job at a bank and was able to borrow $5,000 from the bank to buy the mostly-used illusions. Because of this loan, his friend looses his job. Ivan gets a starving musician friend to write the songs. They stage a backer's audition and raise $40,000. Doug then teams with Maya, who is his assistant during the show and plays the Goddess of Magic. (Mars and Maya will eventually become a team and present their own illusion show.)

After eight months of rehearsal, a last-minute show cancellation allows them to open at the Royal Alexandra Theatre in Toronto, owned by flamboyant merchandiser Ed Mirvish. Bob Mirvish, Ed's brother, had attended the backers' audition, taking his two small sons. Remembering the little boys' delight with Doug's illusions, the Mirvishes hastily called Doug and Ivan, and a bargain was struck. Spellbound had a home.

Urjo Kareda, reviewing for the Toronto Star, said, "Spellbound is a magic show with pretensions, you see, and one of its delusions is this weary plot." Although another critic hailed him as "the most exciting magician since Houdini, Thurston and Blackstone."

Even with bad reviews, audiences love Doug, and the two-week run broke all box-office records for the theatre, including Hair and Godspell. A short piece on January 4, 1974, in a Toronto newspaper indicated that "A spokesman for Spellbound, the magic show ending a two-week run at the Royal Alexandra theatre tomorrow, claims $10,000-per-day ticket sales over the holidays, a feat surpassing Toronto's Hair."

"I was only making $500 a week, less than the members of the orchestra." Doug would later say.

New York producers Edgar Lansbury (Brother of Angela Lansbury and producer of Broadway hit Gypsy) and Joe Beruh (also producer of Gypsy) came to Toronto to see the show, and negotiations begin for a Broadway production which will become The Magic Show.