From Magicpedia, the free online encyclopedia for magicians by magicians.
Jump to: navigation, search
Auto-Mazo Deck (or Pack) was developed and marketed by Sam Drielinger in 1934. 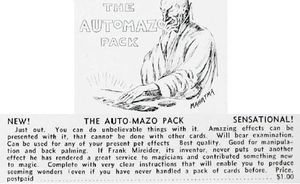 It was later refined by Joe Berg into the Ultra Mental or Invisible Deck.[1]

In A History of the Brainwave Principle (1983), Karl Fulves states that it was advertised by a number of dealers, including Frank Mireider (whose name appears on the instruction sheet) and has been claimed by Ed Balducci.