From Magicpedia, the free online encyclopedia for magicians by magicians.
Jump to: navigation, search
The Card Duck is a comedy magic prop that finds a selected card. 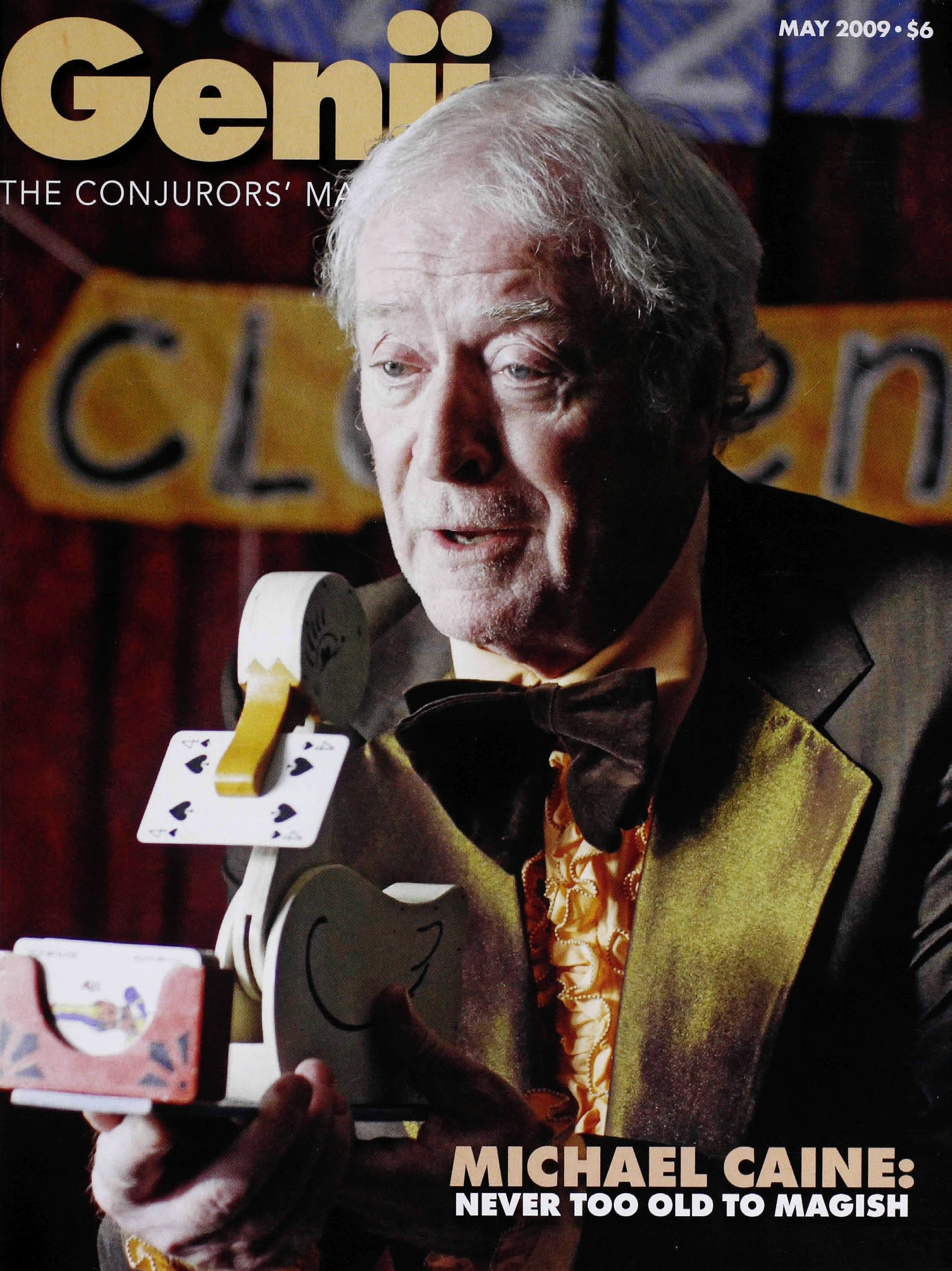 Michael Caine with a card duck

The effect: The magician asks a audience member to select a card. The card is placed back into the deck. Next, the magician introduces his pet "duck". The deck is placed into a card holder that sits in front of the duck. The duck lunges forward and selects a single playing card. This card is shown to be the selection.

Origins traced back to Professor W. Norris, who performed at The Crystal Palace in London from 1868 to 1885. He used a model of a swan to find a chosen card. This was the predecessor of the Card Duck.[1] 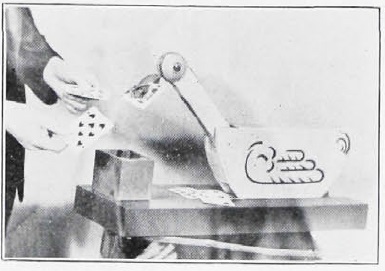 Around 1932, Laurie Ireland began working on the idea, and Ireland's released "Otto the Automaton Duck" in mid-1936:

He not only reads your mind, but proves it! Spectators freely select several cards from any deck, which are immediately shuffled back into the deck. Performer does not see the cards. The deck is placed in Otto's feed box. Performer walks away and requests Otto to find the cards. Down darts Otto's head, his beak opens, and from those 52 cards he immediately bites up the first selected card and offers it for the spectator's confirmation. ... The spectator or performer takes the card, and Otto goes back on the job. A flash of bright orange beak, up again, and there's card No. 2. For the third card performer may take Otto in his hands right down in the audience to the spectator who requests his card from Otto and receives it in his own hands. This can be continued with as many cards as desired. If performer prefers he can work the entire trick in the audience. Otto is always right, never hesitates.[2]

Ireland's design became popular and was reproduced by several manufacturers under various names. Sometime later, after being told that all ducks are female, Ireland changed the name "Otto" to "Shirley."[3] 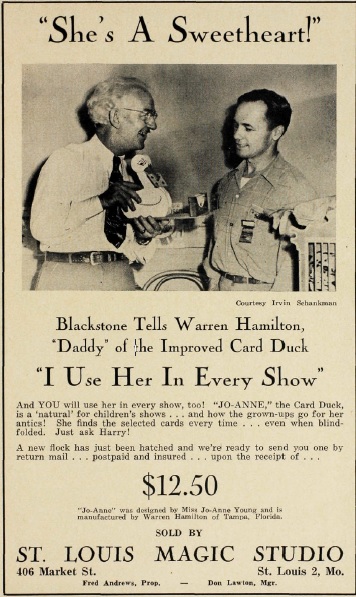 In June 1946, Harry Blackstone appeared at the very first I.B.M. Convention in St. Louis, Missouri. An article the following month described part of Blackstone's performance with what was probably an Ireland Duck:

He borrowed a wood duck which "finds" a previously selected card from one of the exhibiting dealers. The sheer effrontery of Blackstone, daring to use a little duck on a 200 foot stage before an audience of almost 4,000, was typical of the top magician of his generation. He "blindfolded" the duck so he could not "see" the card he was picking. The magicians ate this up and howled; the lay audience really took it seriously.[4]

"She's a Sweetheart!" says Harry Blackstone. "I use her in every show." That's right... he means "Jo-Anne," The Improved Card Duck Made by Warren Hamilton and sold by the St. Louis Magic Studio.[5]

"Jo-Anne" (Jo-Ann, Jo Anne) became extremely popular, and that name is probably most synonymous with the Card Duck. With the possible exception of... "Gwendolyn." 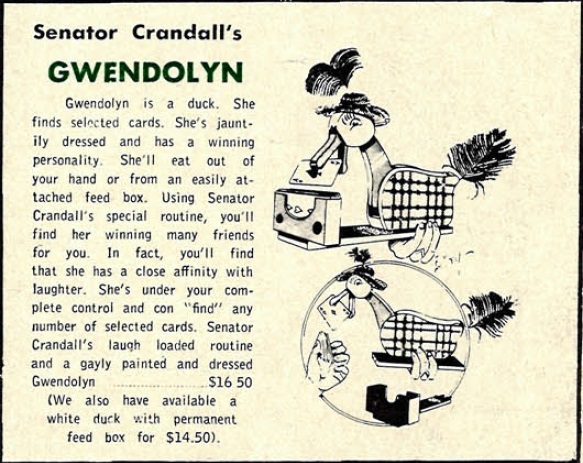 Clarke "The Senator" Crandall and his "Gwendolyn" turned the Card Duck on its head. The Senator started working on the trick with an Ireland "Otto the Automaton Duck" around 1939. He later switched to Hamilton's "Jo-Anne" model, before creating his own duck.[6] Harlan Tarbell wrote in Abra about Crandall's performing "Gwendolyn" in 1951:

At present he is featuring Gwendolyn, the Amazing Duck who picks from the box before her freely-selected cards and other things unexpected. Gwendolyn wears lorgnettes and ear-rings, and the Senator hopes to crash into society through her.[7]

Crandall's "Gwendolyn" was first advertised for sale in September 1961:

Gwendolyn is a duck. She finds selected cards. She's jauntily dressed and has a winning personality. She'll eat out of your hand or from an easily attached feed box. Using Senator Crandall's special routine, you'll find her winning many friends for you. In fact, you'll find that she has a close affinity with laughter. She's under your complete control and can "find" any number of selected cards.[8]

The following year, Crandall started selling the special deck he used for "Gwendolyn," along with an instruction book, Senator Crandall's Duck Deck Routine.[10]

The routine was also later published as "Crandall's Routine for the Card Duck" in the Magic, Inc. instructions for their Card Duck, called "Herbie, the Mod Duck."[11]