From Magicpedia, the free online encyclopedia for magicians by magicians.
(Redirected from Civil War)
Jump to: navigation, search

The American Civil War, also known as the War between the States or simply the Civil War, was a war fought from 1861 to 1865 between the United States (the "Union" or the "North") and several Southern states that had declared their secession and formed the Confederate States of America (the "Confederacy" or the "South"). The war had its origin in the fractious issue of slavery, and, after four years of bloody combat, the Confederacy was defeated, slavery was abolished, and the difficult Reconstruction process of restoring unity and guaranteeing rights to the freed slaves began. 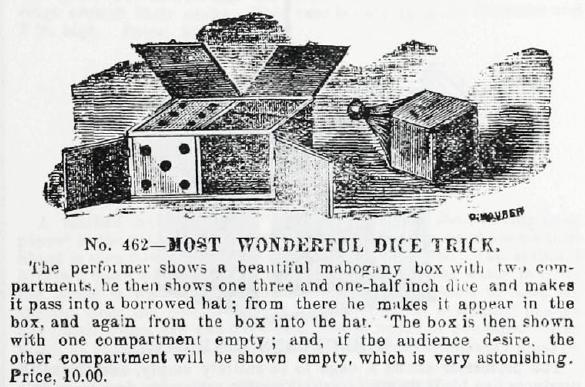 Dice Box, a popular trick during the Civil War era
There were many magicians around during the years of the Civil War. Magic effects performed by magicians during this time included: The Spirit Cabinet,Second Sight, Bullet Catching, Levitations, The Inexhaustible Bottle, The Cups and Balls, The Sucker Die Box, The Devil's Hank, Passe Passe Bottles, The Genii Tube, early versions of the Misers Dream, Rising Cards, and productions of flowers and flags.[1]

The origin of mediumship is usually linked to the Fox sisters at Hydesville, New York in 1848, but believers date the unofficial beginning of Modern American Spiritualism to the Shakers and similar religious groups. By 1853 the movement had reached San Francisco and London, and by the start of the Civil War in 1860 it was worldwide.

The period 1860 to 1910 is known as "The Golden Age" of Automata. During this period many small family based companies of Automata makers thrived in Paris. They exported thousands of clockwork automata and mechanical singing birds around the world.

From the early 1800s until the Civil War, professional gamblers plied their trade on the Mississippi River steamboats that traveled between New Orleans and St. Louis. Up to the time of the Civil War it was necessary to keep cards in card presses when not in use, to prevent their curling up.[2]

Magicians during the era