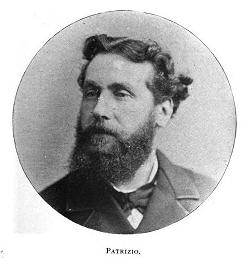 At the age of eighteen, he became an officer of artillery and fought in the war between Austria and Italy. He was captured and imprisoned in an Austria. Patrizio displayed his skill as a conjurer to avoid unskilled labor before the Governor of the fortress and his staff. He ended up being treated more as a guest than a prisoner of war, and became a great favorite with the Austrian officers. [1]

He decided to make magic his profession after being release in 1867. He traveled through Mexico and visited the United States twice (in New York in 1890). D'Alvini joined Patrizio, and they toured South America together. [2]

Patrizio was the first to specialize in cannon ball catching (shot from a cannon) which attracted public attention. When P. T. Barnum engaged Patrizio for his show it was the Cannon Ball Feature that was publicized.[3]

It was widely rumored that Patrizio met with financial ruin and died poverty-stricken in South America. Although Dr. Don Pablo de Areny de Plandolit in his book, Las Maravillas de la Magia Moderna (1913), tells of Patrizio dying in a house of the Paseo de Gracia in Barcelona, Spain.[4]