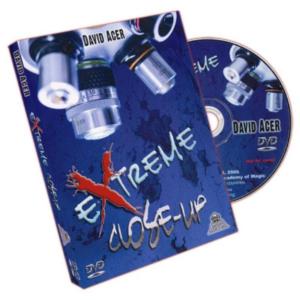 Originally released on video in 1998, David Acer’s Extreme Close-Up, produced by the Camirand Academy of Magic, was reissued in 2006 as a DVD with three new television appearances to go along with those already there on which Acer performs some of the material from this DVD.

Four aces erupt from a face-down deck in a sudden, explosive display. A borrowed finger ring links to the arm of a borrowed pair of glasses. Three quarters penetrate a regular deck that’s resting on the mouth of a drinking glass. A bottle cap is tossed into the air, then suddenly skewered on the end of the magician’s forefinger. A stickman drawn on the back of an indifferent card multiplies and appears on the backs of all four cards in a packet, then vanishes from all the cards but one—naturally, it’s the selection. A borrowed bill changes not once, but twice into currency from any two countries chosen by a spectator. And the list goes on.