George F. Wright (1880-1958), who worked as a sign painter, was a magic enthusiast who had many ideas published in Tops and The Linking Ring.

Raised in Salem, Ohio, his love of magic started at the age of nine by a casual passerby doing a coin trick, then again at 12 by a visit to the county fair when he purchased a magic book a dime. After joining a circus, the side show magician fostered his love of the art.

He served as a Marine in Panama during the construction of the Panama Canal.

Wright lived in the Reading, Ohio area (a Cincinnati suburb), from the late 1930 until the 1950s. In 1945, Wright operated at the Meyers's Service Station in Reading.[1] Following his retirement from the stage, Wright returned to his native city of Salem. He continued to give exhibitions of his magical talents at card parties, banquets and other functions throughout the area. He also continued to issue a challenge to any of the self-styled ‘seers,’ saying he could expose their means of ‘conversing’ with spirits within 24 hours.[2]

The Linking Ring, did a one man parade (possibly the first) of his material in the July 1951 issue.

Wright claims that he was first to discover and develop the single-handed multiplication move used in Multiplying Billiard Balls routines. Wright developed this while working as a young man for Gus Roterberg at his magic shop on Illinois Street, Chicago.[3]

Wright spent a year as national organizer for the International Brotherhood of Magicians, and while active on committees was detailed to conduct an investigation into spiritualism. 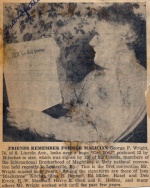 In 1954, his magic friends sent him a huge "Get Well" postcard signed by 150 I.B.M. members that were attending the national convention in Kentucky. The first convention Wright had missed in 40 years.