From Magicpedia, the free online encyclopedia for magicians by magicians.
Jump to: navigation, search
Inverto was a Mechanical Deck created by Theodore DeLand and marketed in August 1914. 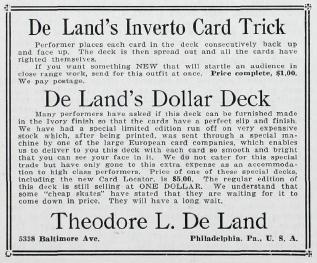 Similar to the effect of Triumph in which cards were mixed face-up and face-down (cards are dealt from the deck to the table, one card at a time, dealing each double-backed card face down, then turning the next card which follows it face up). The deck was then spread to show that they have magically turned all face down.

DeLand also allowed the workings to be published in August 1914 issue of The Sphinx. It was also published in the July 1915 issue of The Magician Monthly.[1] Ellis Stanyon called it "a most bewildering trick" when he described a version called "Self-Reversing Cards" in Stanyon's Magic for December, 1919.

DeLand also incorporated the Svengali Deck principle into another version of "Inverto" so the deck could be displayed.[2]