Born August 22, 1903 in Pittsburgh, Foley became enamored with magic after seeing a performance by Howard Thurston around 1915. Jean began practicing card manipulation and by 1919 was performing in small-time vaudeville. Foley was a student of Silent Mora (Louis McCord) who instilled in Foley a natural style of manipulation and direction in pantomime. At a meeting of the Pittsburgh Association of Magicians around 1920 at which Thurston was in attendance, after seeing Foley's act, the master magician told him: "If I am the 'King of Cards' then you are 'The Prince'." It was as the "Prince of Cards" that Foley began his career in Keith Vaudeville in the early 1920's.

Around 1919, Foley began corresponding with Gene Gordon in Lyons, New York. They met as members of the Amateur Magicians Correspondence Club. 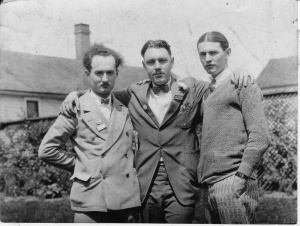 Foley began, as a challenge, to write longer and longer letters. Over a four-month period in 1920, Foley penned a 190-page, 102,000-word "letter" to Gordon which was later featured by Ripley's Believe It or Not! newspaper column as the "World's Longest Letter."

When the first I.B.M. convention was held in Kenton, Ohio in June, 1926, Jean Foley was the first act on the first show of the convention, held at W.W. Durbin's Egyptian Hall Theater. Foley subsequently performed on shows at every I.B.M. convention through 1935. Foley was also responsible for getting his long-time friend from Pittsburgh, Jack Gwynne, booked at the 1927 I.B.M. convention, which led to Gwynne's "discovery" and decision to become a full-time professional magician.

Foley's act changed over the years, always featuring expert card manipulation in pantomime, but with different effects and styles. In 1928 it was billed at "Collegiate Capers" with Foley dressed in grey wool slacks and a blue blazer, as did other college students of the day. (See photo above.) Around 1934 he was billed as "Toby Trix" with an act portraying a shy country boy in ill-fitting suit (based on the "Toby" character popularized in many repertory tent shows of the era); and later, around 1936 as "Jean Fole' The 'Pantomystic,'" in which he played a French character in formal morning coat and grey striped trousers. During this era, Foley was often ranked alongside Cardini and Paul LePaul as one of the top card manipulators of the day. In 1940, John Mulholland in his annual review of performers in his Sphinx magazine, ranked Foley as one of his top-10 favorite acts of the year.

Foley met mind reader and magician, Rajah Raboid at the 1927 I.B.M. convention and the pair became close friends. Later, in the fall of 1936, Raboid hired Foley to be a part of a new stage show he was creating, what became known as "Miracles of 1937." Besides performing his own act on the show, Foley was made company manager. During rehearsals, Raboid also asked Foley to direct and routine what later became known as one of magic's most legendary effects: Raboid's "Sawing In Half" illusion featuring "half-man", Johnny Eck and his brother, Robert Eckhardt. Foley staged the scene and in later interviews always recalled the illusion was "a laugh riot." The show toured through the northeastern U.S. from February until May, 1937.

Following the Raboid show, Foley returned to Pittsburgh where he began performing his act in night clubs. A proponent of actor's rights, he was an early member of the American Guild of Variety Artists (AGVA). In 1940, Foley married Ruth Matteson, an advertising account executive and copywriter. In 1943 the couple moved from Pittsburgh to Seattle, Washington where Jean went to work for the war effort in a local ship yard. 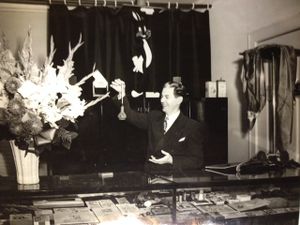 Foley behind the counter of his Seattle Magic Shop. 1946.

Following the war, in 1946, he opened Foley's Magic Shop, in the University Building, opposite the Palomar Theater at 3rd and University Streets in downtown Seattle. The shop became a gathering place for local amateurs and touring professionals who came through Seattle to play the Palomar; Seattle's last remaining vaudeville theater. Foley insisted that his shop would not sell novelties but offer only the finest magic from such companies as P&L, Owen, Merv Taylor and Marshall. Foley also insisted that when a budding young magician bought a prop, they would receive a personal lesson from him in how to properly perform the new purchase. Often Jean would lock the door of the shop during these lessons to ensure privacy and to not reveal the secret to an unsuspecting customer who might walk-in. He developed a devoted following of friends in his shop over the years.

After 12 years in business, Foley closed his shop in 1958. He sold his remaining store stock to Syd Brockman, who operated a magic shop several blocks away.

Foley organized Seattle SAM Assembly 43 in 1946. After he closed his magic shop in 1958, members of the group re-named the club "The Jean Foley Assembly" in recognition of his devotion to magic in the Seattle area. He also wrote the monthly "Seattle-Northwest" column in Linking Ring magazine during the 1950's.

In the early 1960's Jean began working at a top men's clothing store, Klopfenstein's, in Seattle. [1] Always a snappy dresser, Foley was a popular clothing sales consultant to many Seattle businessmen. He continued to work past the regular retirement age of 65, finally retiring in 1974 when he was 71.

Foley remained active in the Seattle magic scene during the 1970's and 80's, encouraging and coaching newcomers to the art, including David Charvet.