Difference between revisions of "Jinx"

The Jinx was a Magic Periodical edited and published by Ted Annemann, also its major contributor, in Waverly, New York. 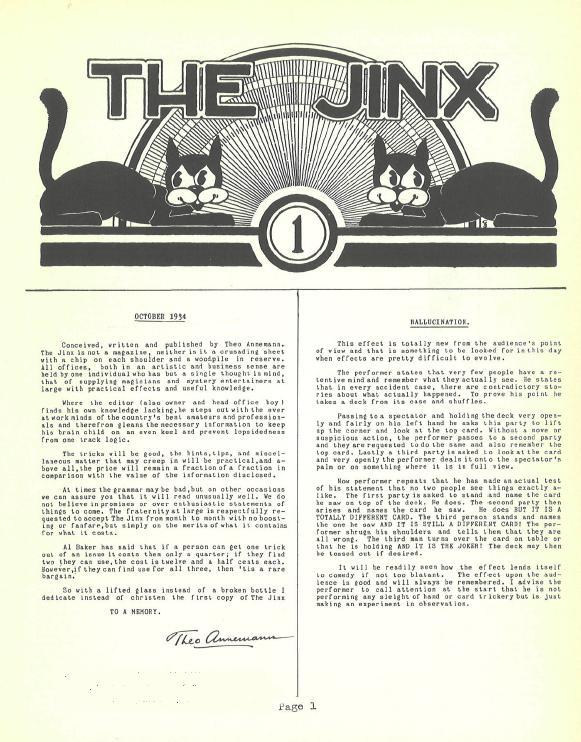 It started in October 1934 and ran for 151 issues. It's last issue was December 15, 1941 just before Ted committed suicide. Originally put out on a monthly basis, it became a weekly publication in October of 1939.

For a short period during the lifetime of the Jinx, Ted Annemann went through what was apparently a "hidden message" phase.

In issues #10, 11, 13, and 14 (and probably many others) hidden messages could be found by looking at, usually in reverse order, the first letters of each paragraph, which were printed in larger, heavier type.

Every Jinx file has 48 pages missing as can be seen at the end of #149 and start of #150. They were to be filled with another "Jinx Extra" that was never completed. Ted, before his death, told Walter B. Gibson that he wanted to reprint his "Popular Card Tricks" (1928) as that "Jinx Extra", but died before he could secure the copyright for it. It was eventually published for collectors as those missing pages by Magic Limited in the 1972.

The "fake" Jinx was published as a spoof, but it outraged Annemann. Most copies were turned over to him, which he destroyed. A copy saved by Gene Gordon (editor of Linking Ring) was used by Jay Marshall when he reproduced it in his New Phoenix magazine (No.317, page 74).

In the early 1930s, Annemann took out ads in some cheap magazine (Real French Capers and Real Tempting Tales). When Annemann made some disparaging remarks about Burling Hull in an issue of the Jinx, Hull published "The Linx" in 1936. In the one page (and only) issue, he dug up the ads and reproduced them for all to see.