From Magicpedia, the free online encyclopedia for magicians by magicians.
(Redirected from M.U.M.)
Jump to: navigation, search 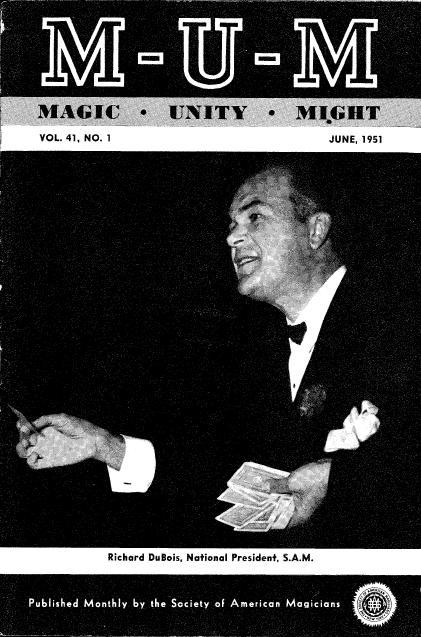 M-U-M, Magic-Unity-Might, is the official organ of the Society of American Magicians.

Prior to M-U-M becoming into existence, S.A.M. reports were published in the Sphinx magazine starting in 1902.

The First Series of M-U-M started in October, 1911 (see ) with some interruptions and changes in the title over the years.

Other editors during the early years included Henry Hatton and other S.A.M. presidents.

Starting with the June 1917 issue, Houdini became editor (this was years after his own magazine Conjurers' Monthly Magazine. John Mulholland was his assistant editor. Houdini was underwriting the cost of its publication and on his death in 1926 they could no longer afford to keep it as a separate magazine.

A deal was worked out to include the M-U-M inside the Sphinx with Mulholland continuing on as editor.

In 1947, John Mulholland took back the contract to start printing M-U-M within the Sphinx again.

Starting in June 1951, the S.A.M. decided it was time to start publishing M-U-M as a free standing magazine again. Milbourne Christopher became editor and continued until July, 1956. After other editors, David Goodsell took over the reigns with the Sept 1976 issues and had an unprecedented 30 year run as editor (never missing a deadline).