From Magicpedia, the free online encyclopedia for magicians by magicians.
(Redirected from Magi-Fest)
Jump to: navigation, search
The Columbus MAGI-FEST is a convention sponsored by the IBM Howard Thurston Ring in Columbus Ohio and is typically the first magic convention of the calender year. 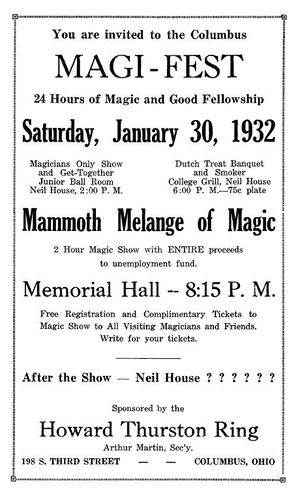 The 1931 IBM convention held in Columbus was so successful that Robert Nelson and Syl Reilly decided to put on another similar convention themselves. Nelson would coined the term "Magi-Fest".

After a falling out between Nelson and Reilly, Reilly ran the convention. Nelson could still sometimes be seen socializing and networking in the lobby of the hotel. Nelson would also have a large group over at his place the following the convention.[1] It regularly draws over 800 attendees.

After 80 years of continuous conventions it was announced in 2012 that they would retire the event. There were several factors in the decision to retire the event including:

However, before the end of 2012 was over, it was announce by Joshua Jay (an Ohio native) and Andi Gladwin that they would lead the team in keeping the Columbus Magi-Fest Alive. The dates for 2013 were scheduled for January 24-26.[3]