Magic : The Magazine of Wonder

From Magicpedia, the free online encyclopedia for magicians by magicians.
Jump to: navigation, search
Magic : The Magazine of Wonder was a twin Magic Periodical to "Ghosts, a magazine of Romance and Reason". The two magazines were to be published every month, alternating between Ghosts and Magic (although only one issue of Ghost was published). They were to be known as "The Twin Magazines of Enchantment." 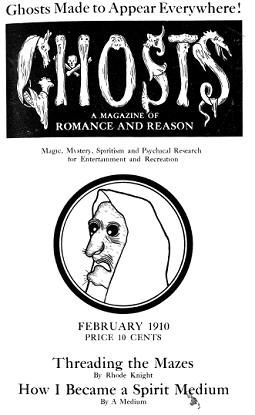 Magic ran from January 1910 to April 1911 and was published by Ernest Evangeline and F. T. Singleton out of Kansas City, Missouri.

The magazine presented magic and allied subjects to the general public with a strong leaning towards the entertainment and recreational side rather than the scientific or philosophical. It stated in its first issue "The object of this magazine is NOT to expose the worlds' best tricks, nor give away the darling secrets of clever professional and amateur magicians. MAGIC is intended to create a wider and more intelligent interest in a most attractive subject - to make more appreciative audiences for magical entertainers, and new devotees of a fascinating hobby."

Dr. A. M. Wilson, edited volume one. The rest were edited by F. T. Singleton.

It may have been the first magic magazine to have a color cover. Magicians that contributed were David Devant, David P. Abbott, Prof. Hoffmann, Harry Houdini and P.T. Selbit