The Magic HandBook, published by Science and Mechanics and sold for 75 cents, claiming 100 Life-Of-The-Party Tricks caused a storm of protests from magicians for exposing many illusions to the public.

Walter Gibson was responsible for most of the text and Sidney Radner, as one of the collaborators, was expelled from the Society of American Magicians for "exposure". 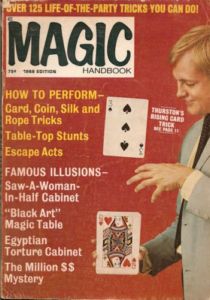 The book was later reprinted as a new edition in 1968, expanding to 125 tricks, included workshop plans for the Dagger Chest, Die Box, Disecto, Crystal Casket, Dove Vanish, and the Square Circle.[1]