For other uses, see Magicana (disambiguation).

Magicana was a magic newsletter started by Bill Woodfield in 1946 as a "A Trade Paper for Magicians" when he was 18 at the encouragement of Walter Gibson, William Larsen, Sr. and Charlie Miller.

The first two issues of Magicana were published as a newsletter (four pages) of 1,500 each on May and June in 1946. They contained tricks, news and reviews.

Woodfield then made the same deal with Bill Larsen Sr. for Genii magazine. Bill promised total editorial Freedom and Magicana started running inside of Genii beginning in Vol. 12, No. 5 (January 1948) issue and continued until April, 1949 (for a total of 16 issues). 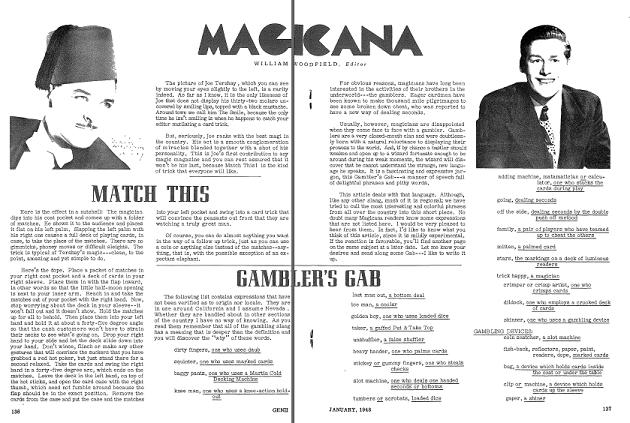 In the Genii 1948 April and Genii 1948 May issues, Woodfield published his Magicana's Hall of Fame list of magicians.

Charlie Miller resurrected it as Magicana New Series, also still inside of Genii (as well as the Intermission column), starting on November 1964 calling it the "New Series". Magicana continued virtually uninterrupted until April 1978. This was the last of the "New Series", which was numbered #154 (which listed Elizabeth Wilson as the editor). A number of Charlie's later columns were ghosted by Elizabeth Wilson (wife of Ron Wilson) and Jules Lenier when Charlie was off on cruise ships.

The column had a two year hiatus until the January 1981 issue saw the return of Magician as a regular column (it was no longer numbered or considered a "magazine within a magazine".) From 1981 until September, 1987 Charlie's writings continued on a more or less regular basis, ghosted at various times by others, including James Patton and Johnny Thompson.

Beginning with February, 1989 issue James Patton officially took over the duties of the Magicana section within Genii. Patton ran the column until 1992.

Tony Giorgio was the next and final editor to take over the Magicana column in 1994.

Woodfield requested that Magicana, in a letter to the editor, that it finally be retired after 52 years of publication on August 1997.

When Richard Kaufman became the publisher/editor of Genii in 1998, he revived the Magicana section and began writing it himself. Earle Oakes was brought on as illustrator. David Acer took over writing Magicana starting with the May, 2005 issue.