From Magicpedia, the free online encyclopedia for magicians by magicians.
Jump to: navigation, search
Mystery Hunters is an award-winning Discovery Kids documentary series on "the paranormal, the supernatural and, by extension, the incredible." Araya (Mengesha) and Christina (Broccolini), two real-life teenage mystery hunters, along with scientist/skeptic/magician Doubting Dave (played by David Acer, who is also a writer and story editor on the show), scour the world in search of unexplained phenomena. Are there prehistoric mega-sharks hiding deep in our oceans? Is there an underwater U.F.O. base off the coast of Puerto Rico? Who built Stonehenge, and what does it do? Could the dinosaurs have been wiped out by an asteroid from space? Did an ancient King named Midas really have the power to turn everything he touched into gold? Are there hundreds of ghosts trapped under the streets of Edinburgh? Did a race of giant humans once walk the Earth? Does the fire goddess Pele live deep inside Mount Kilauea? Is there an ancient sea monster lurking in the dark waters of Loch Ness? And the list goes on. 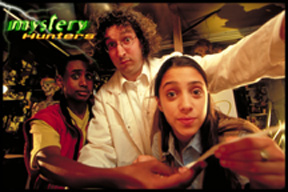 Produced by Apartment 11 Productions, Mystery Hunters has, to date, enjoyed four seasons and 78 episodes, and continues to garner awards and accolades around the world, including ten Gemini nominations (the Canadian equivalent of the Emmys), a Platinum Best of Show prize at the Aurora Awards in Salt Lake City, a 2006 Parent's Choice Award, and a 2007 Alliance for Children & Television Award of Excellence. David Acer has also received two Gemini nominations for his writing on the show (2005 and 2007), as well as a spin-off book deal with Kids Can Press.

In September of 2007, the first-ever Mystery Hunters DVD was released in Canada, a three-episode collection timed for Halloween called Mystery Hunters: Beastly Beings and Monstrous Mysteries, and in the Fall of 2008, a Mystery Hunters/Doubting Dave guide to paranormal tricks and hoaxes called Gotcha! 18 Amazing Ways to Freak Out Your Friends was published by Kids Can Press.

In October of 2007, Mystery Hunters won a prestigious 2007 Japan Prize (sponsored by the Japanese television network NHK). The STONEHENGE episode (from Season III), written by David Acer and Sara Edelson, and directed by Serge Marcil, Eli Gorn and Zsolt Luka, was awarded the Minister of Internal Affairs and Communications Prize in the Early Education category.

Araya and Christina introduce their respective mysteries in fast-paced opening teasers. Sometimes the mysteries are distinct from each other (e.g., Bigfoot and witches), sometimes they're related (e.g., an alien sighting and a U.F.O. sighting), and sometimes they're identical, but tackled from different angles (e.g., who built Stonehenge/what does it do).

Meanwhile, back at Discovery Headquarters, Doubting Dave shows kids at home how to perform a trick, hoax or experiment that mimics one or both of the mysteries being tackled. For example, in the STONEHENGE episode, he teaches viewers how to build a mini-Stonehenge, which functions as a calendar, in their own backyards. Doubting Dave also answers one question per episode, submitted by real kids, in a segment called the V-Files ("V" stands for "viewer"). The question is presented as an animated short, created by Bruce Simpson, and usually connected to the episode theme (e.g., in KING TUT, the V-File answers a viewer's question about whether or not the Sphinx is really as old as the pyramids - it turns out it may actually be quite a bit older, dating back to when there was significant rain in the desert).

Each episode concludes with Araya and Christina (and sometimes Doubting Dave) reuniting, either at headquarters or via communication devices called infopods, to tie their discoveries into a neat little bundle.

GOTCHA! 18 Amazing Ways to Freak Out Your Friends was published by Kids Can Press in September of 2008. Written by David Acer, and illustrated by Stephen MacEachern, the book is a spin-off of David's Mystery Lab segments on Mystery Hunters, and teaches kids to think critically (though not dismissively) about claims of the paranormal, supernatural and extraterrestrial, while at the same time encouraging them to conduct their own experiments and investigations. The book was published in both hardcover (for libraries and schools) and softcover (for bookstores), and has since been translated into French (by Éditions Scholastic) and Danish. In 2009, "Gotcha!" was also nominated for a Hackmatack Children's Choice Book Award.