On Screen & Other Mysteries 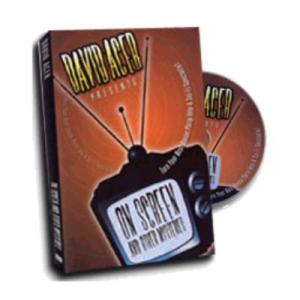 A variation of Paul Harris’s “TV Magic” card trick, David Acer’s “On Screen” was initially the raison d’etre for his 2004 DVD, On Screen & Other Mysteries. However, while the trick has proven popular (it’s even being used on stage with jumbo cards by at least one professional magician), the bonus travelogue and lecture portion of the DVD contains so many sleights, routines and cameos, that tended to be the focal point of the buzz and reviews.

Imagine you have a few people at your home for a party, when suddenly, someone asks you to do a trick. You shrug, pull out a deck, get him to choose a card, then lose it in the pack, whereupon you turn on your TV and click through some channels until you find one you like - lets say it’s a shot of a busy sidewalk. You step back, then spring the deck against the TV screen. When all the cards have fluttered to the floor, one card is seen to be sticking (back outward) to the screen! Or is it? For a man walking by in the TV show suddenly stops, looking straight into the camera. He furrows his brow, walks up to the screen, then pulls off the card, yanking it into TV land. He looks at it on both sides, showing that it is indeed the spectator’s selection, then he shrugs and walks off screen.