From Magicpedia, the free online encyclopedia for magicians by magicians.
(Redirected from Passe Passe bottles)
Jump to: navigation, search

Passe-Passe Bottles is a classic stage illusion or platform magic transposition effect, in which a wine or whiskey bottle, and a stemmed glass or tumbler, magically and inexplicably exchange places under cover of two tubes at the hands of the performer.[1] A marvelous, classic illusion when performed well in a swiftly placed manner, and with an entertaining patter, the effect was used by performers as early as 1876.[1][2]

Utilizing two tin or pasteboard cylindrical tubes, the performer places one of them over the bottle, and one over the glass. The performer commands the covered glass and bottle to "change places", and when the tubes are removed they are discovered to have been inexplicably transposed. This is repeated, with appropriate patter, as long as desired, and with the performer occasionally pouring wine or liquor out into another glass to show that the bottle is indeed genuine.[1]

The effect is most simply performed using the old pasteboard or thin-gauge tin tube sets, as the more modern heavier metal tube varieties require more dexterity, and extra moves by the performer, and even require reaching a finger into the top of the tube, when lifting one of the tubes away from the glass --- a move not required when using the older pasteboard or tin tubes, which can be grasped simply by using pressure on the outside of the tube.[3]

Modern Extensions of the Effect 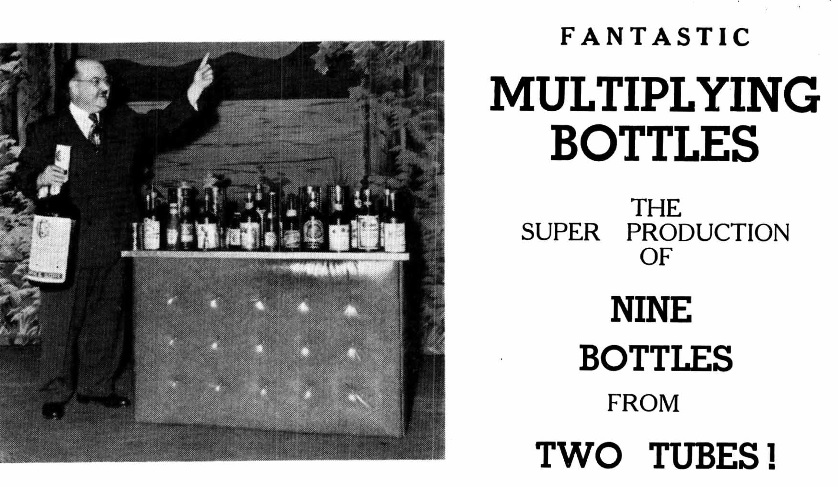 Ad for Multiplying Bottles, an extension of the original Passe-Passe illusion, utilizing the same basic method to perform. - Genii, Vol. 17, 1961.

Around 1919, an extension of the effect, usually credited as having been created by Arthur P. Felsman in Chicago, added an extra bottle for comedy effect.[4]

And, in the 1920's, a further extension of the effect became the modern Multiplying Bottles routine.[5][6][7]

The Multiplying Bottles effect has been criticized by some performers as tending towards giving away the secret working of the simpler, classic Passe-Passe effect. This is by virtue of necessity of repeating essentially the same effect "multiple" times for working the multiplying illusion. This, of course, by definition violates the old cautionary maxim to "never repeat the same trick more than once!"[3]

Many past and present magic supply companies have produced a wide-ranging variety of different sets for the Passe-Passe and Multiplying Bottles effects. Generally, the 2-bottle sets are advertised as "Passe-Passe Bottles"; the 3-bottle varieties are referred to as "Comedy Passe Bottles" (which can also, of course, be used to perform the original effect by just not using the 3rd bottle); and the 8, 9, or 10-bottle sets are advertised as "Multiplying Bottles". There are also varieties, and kid show versions, that use everything from soda pop bottles to ketchup bottles in place of the traditional wine or whiskey bottles.[8]

The older antique and vintage sets are highly sought after, and have often commanded high prices on the collector's market.[3][8]