Born in Oakville, Ontario just outside of Toronto, he has been involved in magic his entire life. Pacific began to specialize in the art of mind reading in 1990.

He received his first magic set at 5 years old which sparked a life long passion with the art of conjuring. His early influence came from seeing Doug Henning perform on television. The first live magician he saw perform was Dickie Dean and his wife, Marg. After his formal education, Pacific honed his skills working in restaurants and for corporate functions. He has traveled across Canada working as part of a team with a traveling Illusion show. He has also gained great experience performing magic for 8 years at Canada's Wonderland. His single greatest influence has always been The Amazing Kreskin.

Pacific has predicted newspaper headlines weeks in advance and has also driven a car while blindfolded through the streets of Niagara Falls. He also performs psychometry and tarot card readings.

Not being a fan of footwear, Paul has been affectionately nicknamed, "The Barefoot Prophet" by his peers. 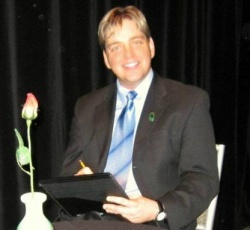 This biographical material is about a living person.
Such material requires a high degree of sensitivity,
and must adhere strictly to all applicable laws in the United States.
See MagicPedia:Biographies_of_living_persons for more information.
Retrieved from "https://geniimagazine.com/wiki/index.php?title=Paul_Pacific&oldid=68574"
Categories: