The Pecking Bird refers to the category of trick in which the performer uses a mechanical automaton or toy, such as a pecking bird, hopping frog, or self-propelled toy car, to find a selected card or cards. Probably the most popular versions are Don Alan's "Ranch Bird" and Dick Koornwinder's "Koornwinder Kar." Also see the Card Duck. 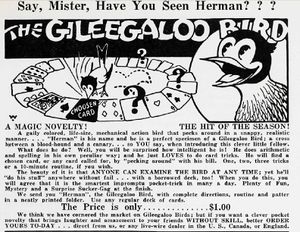 Advertisement in Linking Ring (1935)
Howard P. Albright's "Gileegaloo Bird" was the first popular trick of this type, and Albright was performing it as early as 1936,[1] although it has been speculated that the trick may have been performed earlier in Europe. Dr. Jaks was one of the early adopters of the "Gileegaloo Bird." He named his "Hermann," and carried it in his "Book of Mysteries."[2]

In the early 1950s, Del Ray became quite well-known with a mechanical bird that he used to find a chosen card. It could turn its head, raise its tail, and chirp, seemingly with a mind of its own. But the bird was in a cage, so unlike the other tricks in this category, it did not move around and physically land on or point to a card.[3]