From Magicpedia, the free online encyclopedia for magicians by magicians.
Jump to: navigation, search
Rainbow Fan Deck was a Mechanical Deck, one of the many created by Joe Berg, to perform different Card Fans.

It made it possible to show beautiful designs with the backs of deck. Each time the deck is fanned the audience see a distinct change of design and color of backs. From eight to twelve changes are possible by merely fanning deck the usual way. Later advertised as being able to make 36 different designs. The were also made in the 1940s with different back designs, so no two were alike. 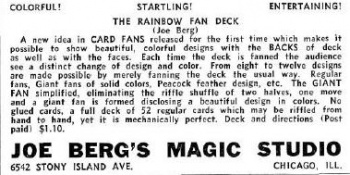