Difference between revisions of "Rick Bronson" 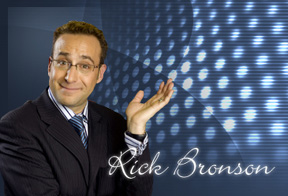 Starting out in 1981 as a children's magician in Montreal, Canada, a 12-year-old Rick Bronson eventually became one of the most popular kidshow entertainers in the city. Four years later, at 16, he decided to try stand-up comedy, and launched a parallel career that would soon become his exclusive vocation.

With much of his early act built around some of the same magic he had been doing at children's shows (a comedy Zipper Dove Bag routine, an interactive, multi-phase silk vanish and reproduction sequence, etc.), Bronson quickly realized he was being looked down on by his fellow comedians as a "prop comic" and slowly phased out the magic, relying exclusively on his sharpening stand-up and improv skills. Before long, he began performing at comedy clubs across the country, then abroad, and his explosive, high-energy, Sam Kinison-esque charm earned him a colossal following. 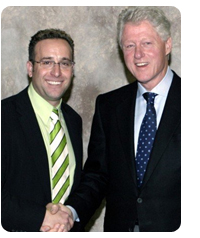 In 1994, Bronson moved to Edmonton, Alberta and married professional print-media model Tammy MacPherson, with whom he now has two children (Noah and Tanner), and over the next decade, he taped a national comedy special for CTV (Comedy Now Presents: Rick Bronson), hosted seminars for the likes of Bill Clinton and Dr. Phil, and won seven Canadian Organization of Campus Activities (C.O.C.A.) Comedian of the Year awards. He also created, hosted and produced three seasons of the hit travel series, The Tourist, which aired on The Travel Channel (and its affiliates) in over 20 countries, and earned Bronson A.M.P.I.A awards for Best Male Host and Best Light Information Series.

In 2005, a business opportunity arose that would keep Bronson tied to his home base for awhile when he opened an upscale comedy club called Rick Bronson's The Comic Strip in the world famous West Edmonton Mall. The club quickly gained a reputation among both comedians and audiences for being one of the finest in the country, and books only the best headliners in North America (Gilbert Gottfried, Kevin Nealon, Norm MacDonald, Damon Wayans, Kevin Pollack, Charlie Murphy, Jimmy Shubert, Tom Rhodes, and the list goes on).

In 2009, Bronson and MacPherson opened another comedy club, this time in the Mall of America (Minneapolis, MN), called Rick Bronson's House of Comedy, which provides the same upscale environment and high caliber entertainment, and, as a nod to Bronson's background in magic, also features walkaround close-up magicians as audience warm-up before the show.

Perhaps not surprisingly, through all of this, magic has never entirely left Bronson's blood, and he still has three original routines at the ready to close a longer set if he’s inclined, including a version of Tricky Bottles (a.k.a. Topsy Turvy Bottles) called "Ricky Bottles" that was published in Seven By Rick Bronson (Acer, 2005). Rick has also had material published in Genii, and appears on two of David Acer's lecture DVDs—On Screen & Other Mysteries (2005) and Open Traveller (2007).