Sponge balls, made of sponge rubber or polyurethane foam and usually about 2 inches in diameter, are a common prop used in many sleight of hand routines.[1] 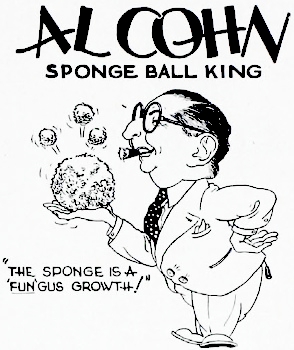 The first known trick with sponge balls was sold by Jesse J. Lybarger in 1925, and publishing the following year in The Linking Ring.[2][3] Also in 1926, Joe Berg introduced his Cups and Balls Routine wherein he made use of balls made of sponge instead of the usual cork.[4]

In the early forties, Al Cohn, owner and operator of The Magic Center in New York City, became known as the "Sponge Ball King." He claimed to have invented Sponge Balls and sold his Famous "Streamlined" Sponge Ball Routine starting in 1944,[5] He was often cited as the inventor, but Milbourne Christopher wrote in 1952 in his column in The Linking Ring that Lybarger deserved credit for the trick. But, Christopher "...[did] not believe that [Cohn] was aware of Mr. Lybarger's work."[6]

Al Stevenson devised a process for making perfect spheres from the polyurethane foam and later Albert Goshman improved the process.

Robert A. Nelson, known for his work as a mentalist, invented the Sponge Rabbits. He started selling his trick Peter Rabbit Goes to Town! in the mid-forties, and it was published in J. G. Thompson, Jr.'s My Best in 1945.

In 1982, Daryl's Peter Rabbit Hits the Big Time created a resurgence of interest in the Sponge Bunnies.

In the early eighties, Patrick Martin introduced Clones, which were sponge balls with clown faces.[9] The trick also came with an eyedropper, with which the performer could "suck" a "Clone" out of one hand, and then "squirt" it into the other.

Ron Bauer wrote a topical version called The Clones From Brazil, with custom sponge balls that resembled a particularly notorious character from the first half of the twentieth century. (Hint: they had angry, blue plastic eyes and a tiny wedge of black sponge mustache. Remember The Boys From Brazil?) Bauer's version also featured a new technique for the common "sponge pass."