The Magic Show was a Broadway musical starring Doug Henning that followed his success with his show Spellbound.

Based on a book written by Bob Randall and with new music by Stephen Schwartz (who wrote the music for the popular Broadway show Pippen), it was directed and choreographed by Grover Dale (who was married to Anita Morris, the actress who played Charmin in the show.) 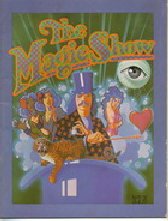 Doug couldn't sing. So to make up for it they wove the plot so that it was the other cast members who presented the musical side of the show, so Doug only had to worry about the magic.

After twelve days of previews, on May 28, 1974 The Magic Show opened at the Cort Theatre in New York City. In a review published in The New Tops (Vol. 14 No. 7, July 1974) Larry Valentine says, "The Magic Show has a rather weak story line but does offer some fine comedy material along with some thoroughly forgettable songs by Stephen Schwartz." Yet he concludes, "All in all it was a delightful evening." Meanwhile, Clive Barnes in the New York Times says, "Doug Henning is terrific! He is the greatest magician I have ever seen; Brilliant!"

The setting for the show is a seedy nightclub, the Passaic Top Hat, a nightclub in New Jersey, where an aging alcoholic magician "Feldman the Magnificent," (David Ogden Stiers, who would later claim fame as Charles on the hit TV show M*A*S*H) an overly grand performer. Manny the Top Hat owner (Robert Lupone) wants to replace him. Because he is drunk all the time, Manny brings in Doug Henning's character, also named Doug. He is very unconventional as far as magicians go, as Feldman points this out in the song "Style."

Doug has this assistant named Cal (Dale Soules) who is in love with Doug, but he is focused on advancing his career and pays little attention to her. She sings that she'd like to be a "Lion Tamer," in order to get him to notice.

Donna (Annie McGreevey) and Dina (Cheryl Barnes) are the rock act in the club. One of them dates the nephew of a big agent named Goldfarb (Sam Schacht). Goldfarb is coming to the club to check out Donna and Dina as a favor to the nephew. Everyone is excited, especially Feldman.

Meanwhile, Doug realizes he needs a beautiful assistant. Cal gets mad and tells him she's just going to go back to West End Avenue. Doug is busy conjuring up the beautiful Charmin (Anita Morris).

Charmin says when Goldfarb gets a look at her, it's Doug's act that he will love. Donna and Dina get worried, and along with Feldman, plot to expose the secrets to Doug's tricks during the show. They fail. Doug realizes he loves Cal, and gets to her before she leaves. Charmin is sent back to wherever she came from. Feldman tries to do an act with Donna and Dina.

In the Thursday, June 13, 1974 edition of the New York Times, Doug explains how he prepares for shows. "I keep myself in condition … during the day, I work these cards and do finger exercises - this is my equivalent of a musician practicing his scales. I do yoga exercises for an hour a day and I meditate for 20 minutes twice a day. I can't be tired, because I might get killed if I don't move fast."

The show became a four-an-a-half-year Broadway fixture for theatergoers, running either 1,859 or 1920 performances. (Depending on which source you use.)