From Magicpedia, the free online encyclopedia for magicians by magicians.
Jump to: navigation, search
The Pendragons were the award-winning husband-and-wife team of American illusionists of Jonathan and Charlotte Pendragon, who call their work "physical grand illusion". They are widely known thanks to numerous national and international television appearances. The couple are distinguished from many other husband-and-wife magic acts in that Charlotte Pendragon is credited as an equal partner rather than an assistant. She has been honored in her own right as a magician and has achieved notable firsts as a woman in the magic profession. 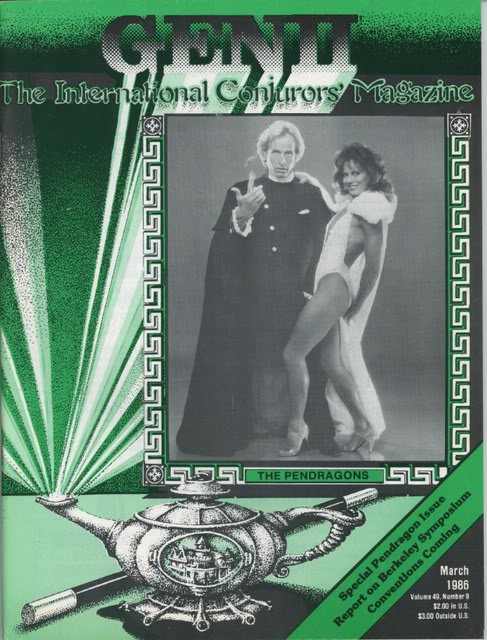 During a fall at his home in late September 2006, one of the arrows from Jonathan's archery collection pierced his liver, his stomach, and his heart. It happened while rehearsing a dangerous trick for his upcoming show involving a compound bow and arrow. He has since made a full recovery.

They have since disbanded with both appearing now as solo acts. Jonathan recently premiered his one-man show Metaphysics, an amalgam of mentalism and magic, at the Peller Theater in the Magic Castle.

Charlotte was the first woman to receive "The Magician of the Year Award" from the Academy of Magical Arts. Together The Pendragons have won the prestigious award twice. In 1991, Charlotte Pendragon became the first woman to become a Member of the Inner Circle of the British Magic Circle.

This biographical material is about a living person.
Such material requires a high degree of sensitivity,
and must adhere strictly to all applicable laws in the United States.
See MagicPedia:Biographies_of_living_persons for more information.
Retrieved from "https://geniimagazine.com/wiki/index.php?title=The_Pendragons&oldid=82466"
Categories: