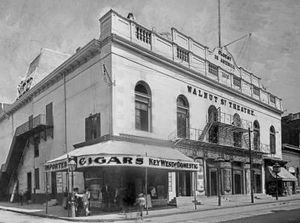 Standing at the corner of Ninth and Walnut Streets in Philadelphia, Pennsylvania, many noteworthy American performers and magicians of the 19th century and 20th century have appeared on its stage.[1]

The Walnut was the first theatre in America to have gas footlights and then air conditioning. In 1863, the Walnut was purchased by famed actor Edwin Booth, the brother of John Wilkes Booth.[2]