The Windsor Magic Circle is Ring No. 116 of the International Brotherhood of Magicians (IBM) in Windsor, Ontario, Canada.

Starting in 1951 the organization was affiliated with the IBM. But in 1959, it was decided by the members that it would be best to break away from the IBM and use the local membership fees to create and fully support their own new local club they would call the "Windsor Magic Circle".

In 1960 the Province of Ontario issued a Charter incorporating the Windsor Magic Circle as a Corporation. The charter members included Larry Jennings and Ron Wilson. 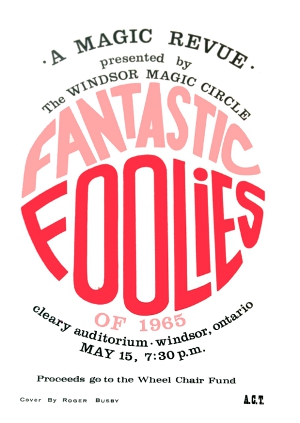 Cover of "Fantastic Foolies of 1965" program

Early in their history, the club started putting on an annual show, the proceeds of which went to its community project, the Wheel Chair Fund, which helped provided wheel chairs free of charge to anybody who needed them.

In 1965, the Windsor Magic Circle presented "Fantastic Foolies: A Magic Revue." The idea for the show was to recreate the performances of some of the great magicians of the past, with the members playing the parts.

Clarke "The Senator" Crandall was the Master of Ceremonies. Other performers included Ron Bauer (then-president of the club), the Jan-San Duo (with Sandra Kort), and Jerry Deneweth.

In the early seventies, President Johnny Ould[1] encouraged the club to get reinstated as IBM Ring 116. Ould was also responsible for creating a unique website for the club, [1], which is worth your visit. His "All Canadian LINKS Page" is a popular resource for things magical in Canada, and provides listings of Canadian magicians and Magic Dealers.