Yellow Perils was the term coined by Patrick Playfair to describe the bright yellow pictorial covered books produced by C. Arthur Pearson Ltd. of London in the early 1900s. Most of them were books on magic and other allied arts. Sir Cyril Arthur Pearson (1866 – 1921) was a British newspaper magnate and a prolific publisher who had no particular interest in magic, and in fact went blind by 1914, due to glaucoma. As an author he used many pseudonyms and wrote a number of instructional books on folkloric divination such as card-reading, and on puzzles, both under his own name and under the pseudonym Professor P.R.S. Foli. 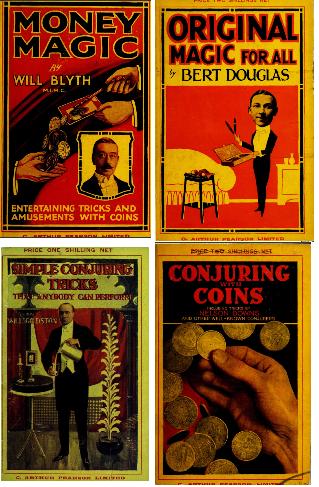 Pearson's books on magic were originally very inexpensive, at only one shilling or two shillings a piece. Most of them had yellow card-stock covers over-printed in black and red. There was debate among magicians at the time as to whether they were offered for sale primarily to the public rather than to the magical community and were therefore to be considered exposures. Professional magicians started referring to them as "the yellow perils" — a term derived from the xenophobic 19th century metaphor used to depict peoples of East and Southeast Asia as an existential danger to the Western world — because their secrets were being made available so cheaply.

Raymond Ricard noted that there were 33 titles published in this series over a period of about 25 years, although not all were related to magic or the allied arts.

These books now are highly sought after by some collectors.