From Magicpedia, the free online encyclopedia for magicians by magicians.
Jump to: navigation, search
Dominique (b. 1932), a French magician known for his pick-pocket routine., won third place in presentation at the first FISM in 1948 at Lausanne (Switzerland) and performed on the Ed Sullivan Show in 1968.[1]

Born in France, he was first heard of some years ago at a Paris convention when he did a "sleight of hands act". In his own words: "I missed everything! I should have received the award for comedy act." However he went on working with his magic.He also joined the National French Theatre, where for two and a half years, he did a variety of small parts. Then, for the next ten or twelve years he went into the theatres, first with a magic act and later with a Vent act. During this time, he was working on the pickpocket act that was eventually to take him to the top. 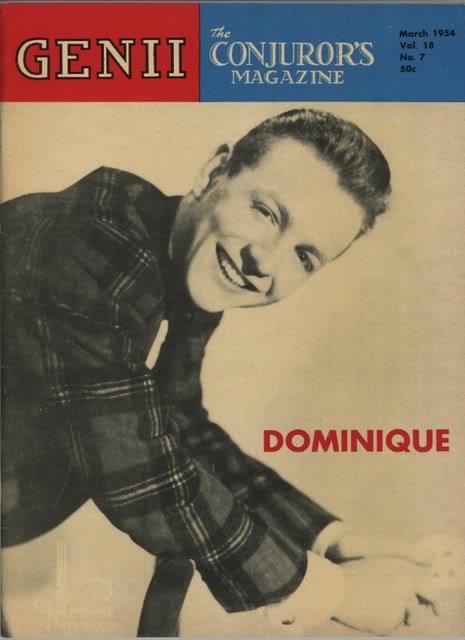 Dominique got his biggest break about fifty five years ago when he featured in a five-page spread in Life Magazine.[2] Since then, he has played Las Vegas eleven times appearing at the Sands,Sahara, Flamingo, Desert Inn, New Frontier and three times at the Stardust.

His last appearance lasted was in 1982..... That his act is next to closing of one of the all-time spectacular shows is a tribute to the way he captures an audience and entertains it.

His current act starts out with Dominique in a bright pin spot playing classic guitar. He actually plays beautifully, having learned for his own pleasure. He wipes his brow with a tissue and tearing it, the pieces start to fly around in the air in a most magical manner, finally flying into the guitar. Two or three more pieces fly around and fly into a rose bud on the guitar. Absolutely beautiful, and something that has not been done in years! He tells us that he has further developed this bit so that they fly further out over the footlights. Then, he is introduced and he's off and running with his pickpocket routine that involves many people on the stage and a laugh-a-second as he skillfully takes advantage of every opportunity for fun without embarrassment.

Dominique says that we stress that he does not "bluff" his way through the act as many have stated wrongly. His act was very technical and has come only after years of trial and error. He admits he used stooges but never the same.He points out that the portion of his act using stooges is more difficult than when he is doing portions without them and that there is a one ten-minute section of the act that uses absolutely no stooges or coaching.

He says psychology is more important and his greatest asset is his ability to work with people. For this reason, his act has never been copied nor can it successfully be copied.

In 1970, he thought of retiring from so much travel. He opened a restaurant outside Paris : "L'auberge de la Dauberie", which has been awarded four stars and has been successful beyond his dreams. For six years in a row it was awarded the Best Garden plus many prizes for quality of food. He has successfully performed and keep in magic and is continuing to develop his opening routine and also has many other magical ideas.Such an amazing substitution of a spectator in a live goat.

His future was secure as long as he wants to work. He was one of the highest paid acts in the theatre. He was booked into Monte Carlo, Spain and then the Lido show in Paris until the end of the 1980. Then back to Spain and on ........and on.

His wife and two daughters will travel with him and he is most happy for this. Two and half years in vegas without them was much too long. Dominique is a classic example of the International performer who can perform in all major languages and who never fails to delight his audiences to the point of "stopping any show".

Today, he has retired in a small village in Normandy (France). Few miles where American troops landed (Utah beach) more than a half-century ago.

Dominique always follow the evolution of the magical world....