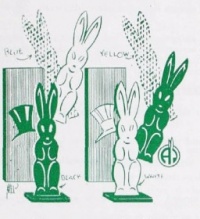 Hippity-Hop Rabbits is a classic comedy, sucker effect that uses two cut-out wooden figures of rabbits, on solid bases so they stand up-right, normally one white and one black. Each rabbit has a rectangular wooden cover, traditionally decorated with a black top hat and cane design on both sides of one, and with white top hats and canes on the other.

In its presentation, upon the performer's command the two rabbits keep magically changing places, while under their respective covers. At its finale, the effect culminates with a surprise, sucker-effect finish.

Hippity-Hop Rabbits is commonly used in shows for kids, and has become something of a children's magic classic. Just as with the adult audiences, the kids begin to think they know the secret to how the magician is doing it, which sets up the surprise sucker finish.

James Stewart thought very highly of the Hippity Hop Rabbits and at one time he said: "I consider this by far the greatest classic of its kind ever created and vastly superior to the Die Box."[2]