Princess Magic Shop (originally Princess Novelty Shop) was opened in 1925 in Chicago, Illinois on 321 S Clark Street, next door to the Princess Theatre , by Sam Berland with partners Joe Berg and Harry Faber.

It was the first street-level magic shop open to the public in America. Also the site of first magic lecture (by Harlan Tarbell).[1] 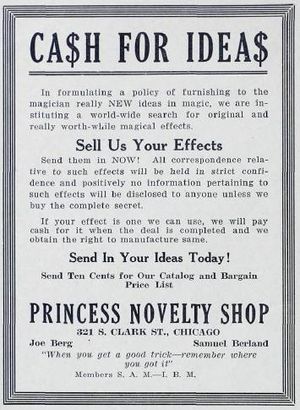 Faber withdrew to open his own shop in the Chicago Loop area.[2] Berg purchased out Bergland's half interest near the end of 1926 (after they both got married) and continued to operate it out of the Princess Theatre building.[3]

The shop was sold to Alton Sharpe in 1951 when Berg moved to Los Angeles, California to a shop on Hollywood Boulevard. Sharpe renamed it the Sharpe Studio of Magic and ran it until 1957.[4]